This VBS directing thing is hard.  Really hard.  But throw a couple of kids into the mix and it just got exponentially harder.  Especially if any of them are five and under.  And yours.  I’ve walked that road.  Just as you have, I’m sure.

It’s so easy to reflect on your day during VBS and realize how poorly you did at both your jobs – parenting and directing VBS.  Yet, with a little forethought and a lot of prayer and support, you can look back on a VBS day and see how, with God’s grace, you made it.  And by His grace, you did well.

So here are my ideas for staying sane and caring for your family in the midst of VBS.  But you’re not off the hook…I want your ideas at the end!

Some of my craziest times at VBS are during the transition of beginning and ending VBS.  Right when I should be focusing on getting my own kids to their classes or retrieving them from their classes.  You don’t want your kids to feel like you forgot them in the midst of taking care of everyone else’s kids.

Consider having someone who can care for your kids during the transition times of VBS.  Arrange it before VBS so that you are not having to think about it during the VBS chaos.  Ask if he or she is available to care for your kids at least a half hour before VBS begins and after VBS is over.  This will allow you to know that your kids are well cared for and you are providing for their needs (no need to feel guilty for not being the one picking them up) while being able to assist your volunteers as they prepare for their responsibilities at VBS.  You will be able to check in with volunteers and have the opportunity to provide support as needed.

Provide the necessary security measures to that individual so he or she can get your kids – be it a security code, a wristband, or whatever your church uses.   You will also want to communicate your plans with your person responsible for checking out your kids so that they are aware also. 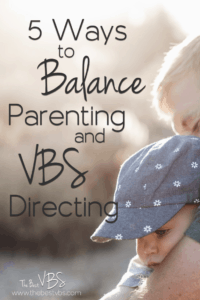 Sometimes, before VBS, I would have someone who is not directly serving with VBS ask me if there was anything that he or she could do to help.  Say yes!  Ask if he or she would be willing to provide a meal for your family during the week of VBS.  It might be hard to humble yourself and ask, but I would venture to say that people want to support you but might not know how.

When you are in the position to serve someone else, you want to know what you can do that will be the most helpful.  How do you know what that is if the person doesn’t share a need?  It is good to equip people to serve each other.  You can model this for others in your church by being transparent about your needs.

Maybe a meal isn’t exactly what would bless you most.  Maybe an afternoon nap while someone else watches your kids would renew your spirit and mind.  Consider allowing someone to serve you in this way.

My mom began directing VBS when she had five kids 10 and under at home.  Four of which were girls.  The middle school neighbor girls would come over and do our hair each morning before VBS.  Don’t be afraid to think outside the box of ways to allow people to serve you!

[Tweet “It is good to equip people to serve each other. #VBS”]

VBS is so all-consuming.  It easily overtakes your WHOLE life.  Can I get an Amen?  However, contrary to popular belief, VBS is not your main priority.  Not before VBS.  Not during VBS.  Not after VBS.  Number one is your relationship with God.  Don’t allow the busyness overtake time in prayer and personal study of God’s Word.

And then you have your family.  They come next.  At least they should.  In reality, (my own) they are often found below counting out a million glue sticks, scissors, and crayons.  And this should not be.  I am constantly working to maintain a healthy balance in my life where my family is my priority above my ministry.

If you maintain a healthy balance of priorities, you have given your kids a beautiful gift of an example of doing ministry and family well.

I’m not contradicting myself when I say that it is ok to delegate the care of your kids before and after VBS but keep them a priority.  You are showing them that you will provide care for them, but that your world does not revolve around them.  At other times during the week of VBS you can show your kids that they are a priority by:

You know the girl or guy who is always playing with your kids at church.  She seeks them out on Sundays and other times as well.  He is always ready with a fist bump.  The teens that just “get” your kids.  You love them and appreciate them.  Have you ever considered adopting them?  Not for real, just for the week of VBS.

Invite that teen who is helping at VBS to be the one who cares for your kids before and after VBS.  Offer to feed him or her lunch.  Take her home with you after VBS for several hours if you have a morning VBS.  Invite him or her to come over before VBS for several hours if you have an evening VBS.  Sometimes an extra set of hands makes all the difference when you are putting shoes on, doing hair, and putting shoes on again…because you know your toddler will take them off at least once before you get out the door.

This is a tough one.  It can take everything you have to prepare for VBS and keep your family a priority.  It is easy to suggest that you get your laundry done early, do meal planning and prep work before VBS and set out all your clothes for the week.  But in reality, that is just a difficult task to accomplish.

Yet, when you take a few minutes to plan the needs of your family before VBS, you are setting yourself and your family up for a more successful week of VBS.  Consider planning out one of those areas, be it clothes for your family, meals, or extra transportation needs before VBS.  It is possible that this will allow you to prioritize time with your kids while you are at home during the week of VBS.

You have been given a huge task.  But be encouraged.  You serve a bigger God.  One who will help you and uphold you daily as you work through the task He has given you!

Do you have volunteers who are parents of young kids?  Check out these 11 ideas to help encourage and serve them as they serve at VBS!

What about you?  What are your favorite ways to maintain your sanity of balancing parenthood with directing VBS?  Comment below and encourage us all! Keep up-to-date on tools that will help make your VBS the best!

Share your first name and email address to get practical tools and content that will help make your VBS the best that it can be.

Looking for Information About…

Get 11 ideas to love your volunteers who have young kids well.  These are practical and free or low cost (except for the chocolate...lots of chocolate :)

And stay up-to-date on the latest from The Best VBS.  You will get tips and ideas to help you make your VBS the best!